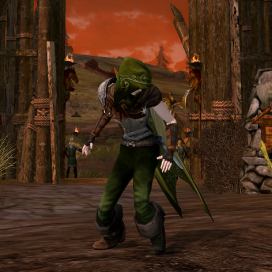 The Anniversary festival offered a nice but not dyeable cloak, which I decided to make a hunter’s outfit for. I also wanted to find a use for the vest from the Isengard prisoner sequence, which has an interesting design, albeit with a white hand stamped on the back; well, a cloak covers that up nicely (even the Grey Company shoulders disguise it pretty well with the cloak off). The result is an unusual mix of well-crafted and well-worn pieces in green, grey, and brown.

Though it’s not visible with the hooded cloak on, she is also wearing a Battle-mask of Rhûn, umber (lootbox prize, sometimes available at the auction hall). It’s really a shame that helmets never show along with a hooded cloak; true, in many cases the combination wouldn’t work due to styles or clipping, but that’s also true of most other pieces. How often have shirt sleeves clipped through gauntlets, collars through shoulders, leggings through boots, or boots through leggings (not to mention weapons through cloaks)? We still have the option of combining them.

And at level 80, the hunter got new boots (Eastemnet Skirmish Boots, crafted, grey) whose straps nicely complement the bands on the gauntlets and whose top/inner section pairs well with the light color of the cloak.

2 comments on “Hunter: A strange mix”